At Canonbury antiques we carry a range of Chinese blue and white porcelain of various shapes, styles and sizes. Blue and white porcelain really stands out and as such is loved by interior designers and discerning individuls for the style it brings to interior schemes. The blue effect is created by a blue pigment, normally cobalt oxide, which is then hand painted and decorated under the glaze of the porcelain.

Blue and white porcleain was first widely used in China in the 14th Century, although its origins are thought to have come from Iraq originally as artisans there first used this look in circa 9th Century AD. It was also very popular in European produced tin glazed earthenware such as Delftware in Holland. Deltware – or Delft pottery – is a blue and white pottery made in and around the Delft area in the Netherlands. 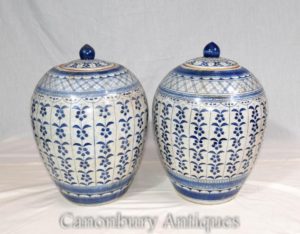 You can see the Islamic influence with the Arabesque designs
The earliest blue and white porcelain produced in China came from the Henan province during the Tang Dynasty (618–907) and due to its age is hence very rare. Other types of early blue and white ware include those of Jingdezhen ware which dates to the early Ming period (1300-1320). It was made by being once fired  – after the ceramic body was dried out it would be hand painted with a cobalt blue pigment mixed with water and overlaid with intricate brushwork. Then it would be coated with a clear glaze and then fired up at high temperature.

( Pair Chinese Blue and White Porcelain Planters Pots Dragon )
In the 18th Century the taste for blue and white porcelain in Europe continued under the rule of the Qianlong Emperor. It is common to see the Islamic influence in terms of design on the manufacturing and painting of the designs. Chinese blue and white ware became very popular in the Middle East from the 14th Century and hence you can see classic Islamic designs and arabesques co-existing with Chinese designs and motifs such as dragons, lotus flowers, cranes and wise men. 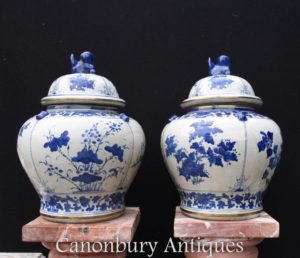 ( Pair Chinese Blue and White Porcelain Vases Lidded Urns Kangxi )
One thing is for sure, Chinese blue and white porcelain really looks good in any interior, the clean and stark contrast of the blue against the white background really stands out and makes a bold statement. Much of this Chinese blue and white porcelain is on display in our Canonbury Antiques Hertfordshire showroom so please get in touch for an appointment. We are conveniently located just 25 minutes north of London in the leafy Hertfordshire countryside. Alongside our Asian art and porcelain, we specialise in art deco furniture, classic English dining furniture, continental antiques, bronzes, architectural and the world of interiors. Please get in touch to make an appointment or if you have any other questions.

Please enjoy some videos of Chinese blue and white porcelain from the Canonbury Antiques YouTube channel: